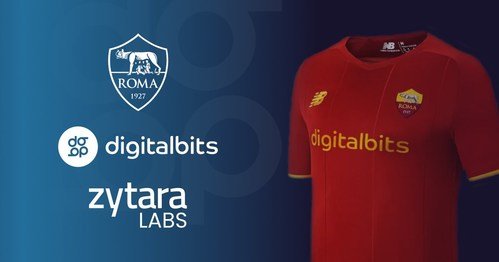 By Fin Strathern | July 29, 2021
Categories: Blockchain,
Fin is an editor at TechForge Media and University of Bristol graduate. He applies an impressive knowledge of the latest technologies to his writing and enjoys interviewing and engaging with leading industry figures. You can follow his Twitter @FinStrathern or connect with him at https://www.linkedin.com/in/finstrathern/.

As part of the deal, the DigitalBits Foundation, which is supporting the partnership, will have its DigitalBits blockchain branding displayed front and centre on the Series A team’s jerseys.

Together, the Italian top-flight team and Zytara Labs will use the DigitalBits blockchain to create digital player cards and non-fungible tokens (NFTs) that capture current and historical moments from AS Roma’s 100 years of history.

In addition, the two entities will integrate and accept ASR blockchain based digital assets and XDB, the protocol’s native token, as new purchasing methods. Fans will also be rewarded for interacting with these new assets through live interactions, including matchday activations from inside the stadium.

The partnership likely represents the most notable sponsorship deal to date between a football club and a blockchain-based firm.

Al Burgio, founder of Zytara and the DigitalBits blockchain, said: “This historic relationship with AS Roma, one of the most legendary football teams in the world, is transformative, not just for Zytara and DigitalBits, but for the blockchain industry as a whole.

“AS Roma will be expanding the collective imagination by demonstrating how blockchain technology can be leveraged to elevate the connection between sports teams and their community of fans and other supporters.”

Guido Fienga, CEO of AS Roma, said: ”We could not be more excited to have AS Roma officially join the DigitalBits ecosystem. DigitalBits is a blockchain known for its speed, efficiency, and sustainability: traits that mirror the values of our club and will allow us to deepen the engagement with our fans worldwide in numerous ways.”