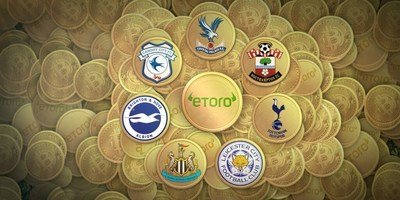 The world’s largest social investing platform eToro has inked a sponsorship deal with seven Premier League football clubs in the UK, all paid with bitcoin.

The Israel-based company partnered with marketing agency SportQuake to strike the deal, which will give it brand access to interview backdrops, rights to players, tickets, stadium LEDs and other stadium advertising.

“The blockchain technology that underpins cryptocurrencies like bitcoin brings transparency, which we believe can improve the experience for everyone who loves the ‘beautiful game’,” commented Iqbal V. Gandham, eToro’s managing director for the UK; “from fans being targeted by ticket touts, or a club negotiating a transfer, we believe that blockchain will revolutionise the world of football.”

Gandham added in a later statement: “As a global multi-asset platform where you can purchase the world’s biggest cryptoassets alongside more traditional investments, we are excited to be partnering with so many Premier League clubs and make history by being the first company ever to pay for a Premier League partnership in bitcoin.”

“Blockchain can improve the experience for everyone who loves the ‘beautiful game’,” says eToro UK MD Iqbal V. Gandham.

While the sponsorship payments were made in bitcoin, the participating partners have agreed to open bitcoin wallets with eToro for use in future payments, and plan to eventually employ blockchain technology to assist in the detection of authentic merchandise and ticket scalping.

The investment platform is hopeful that the currency will eventually replace sterling in the multi-billion pound transfer industry, visualising a world where players will be bought and sold with bitcoin, but while this may be a tad optimistic at present, many of the teams involved have spoken positively of the new partnership and the potential of bitcoin’s underlying technology for their business.

“We are extremely pleased to be welcoming eToro as a club partner. We look forward to working with them and learning more about the potential that cryptocurrency and blockchain technology can have in football,” said Southampton F.C’s commercial director, David Thomas.

Fran Jones, head of partnerships at Tottenham Hotspur, added: “At Tottenham Hotspur we are committed to technology and innovation and as such we’re excited to welcome eToro as a partner in a category that is developing at a rapid rate.”

Commenting on the deal to the Telegraph, Gandham said: “We’ve done a sponsorship deal, but rather than pay them in traditional pound notes we’ve paid them in bitcoin…. What they choose to do with that is entirely up to them.”